In BiH, over 4,000 households have improved their energy efficiency through the EBRD-GEFF Programme 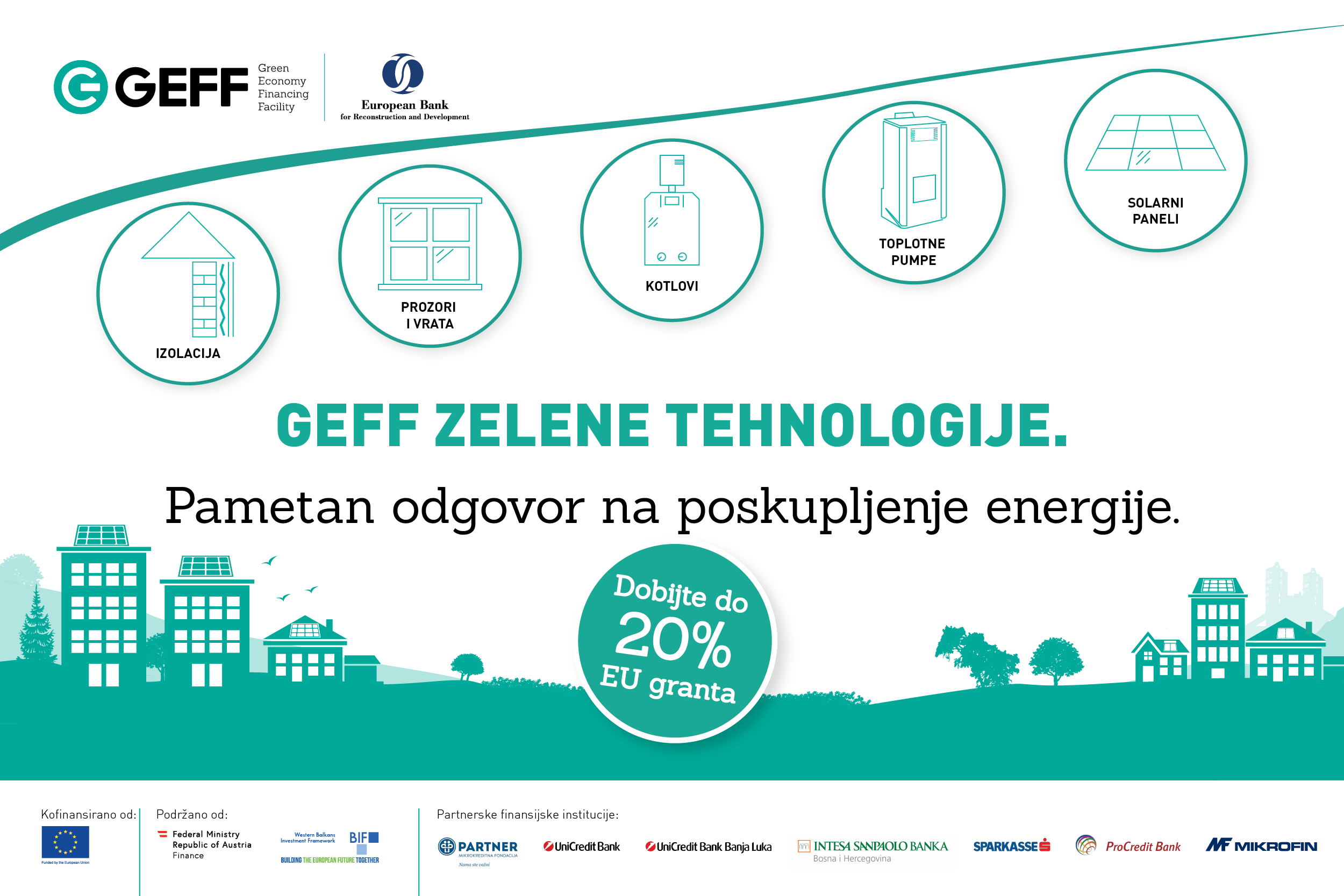 This year Europe has experienced a cold and expensive winter. Along with very low outdoor temperatures, the price of key energy sources, electricity and gas, has increased. This record increase in energy prices, which has pushed European electricity costs to record heights, has led to an expensive winter heating season for consumers. The price of gas is formed quarterly and is calculated according to a formula that is largely based on the price of oil on stock exchanges over the previous nine-month period. Given that the price of oil is constantly increasing, so is the price of gas. Following this trend, it is to be expected that gas in the second quarter, that is, from April of this year, may potentially be more expensive. However, people can “take energy into their own hands” and respond to the newly increased energy prices, ultimately to start saving money.

Energy efficiency basically means to use less energy to get the same job done or to perform the same function. It is necessary to distinguish ‘energy efficiency’ from ‘energy saving’, as energy saving always implies a form of abstention i.e., a reduction of work volumes, while efficient use of energy in households means maintaining the same level of quality of life. The implementation of energy efficiency measures, such as thermal insulation, the installation of heat pumps, solar panels, pellet stoves, efficient windows and doors, leads to reduced energy consumption and greenhouse gas emissions, thus fulfilling the steps along the path set in the EU Green Plan. Also, and most importantly, it allows for significant cash savings on an annual basis. For example, by installing a heat pump in combination with good thermal insulation of exterior walls and energy efficient windows on a family home, it is possible to save up to BAM 2,500 per year, and reduce CO2 emissions by up to 15 tonnes annually. By applying these same measures to a flat, a potential reduction of costs of up to BAM 1,200 per year, and the reduction of CO2 emissions by 7 tonnes annually, are possible.

The GEFF Programme enables the return of a portion of the funds through grants provided by the European Union, and depending on the number of energy efficiency measures introduced, incentives go up to 20%. The total value of investments in green technologies through the GEFF Programme in the Western Balkans is EUR 135 million, of which over EUR 30 million have been earmarked for BiH. Today, households are much more aware of the possibilities that improved domestic energy efficiency bring, and a direct indicator of this is the high amount of interest expressed by the general public and the number of implemented projects”, said Dragana Tanasić, GEFF Project Manager for the Western Balkans.

In just four years, since the GEFF Programme has been active in the Western Balkans, over 12,000 households in the region have improved the energy efficiency of their homes, including over 4,000 families from BiH. To date, the European Union has donated a total of EUR 10 million to the inhabitants of the region for investments in green technologies, EUR 2 million of which has been donated to households in BiH. Energy efficient windows and doors, biomass boilers and thermal insulation are the most sought-after items when it comes to investing in green technologies.

Thanks to the application of energy efficient technologies, households in the Western Balkans have reduced CO2 emissions by 15,000 tonnes per year, the equivalent of removing 9,500 cars from the streets.

How to choose the best energy efficient technologies for your home?

The EBRD-GEFF Programme has established cooperation with over 4,000 best-in-class manufacturers and retailers of energy-efficient technologies, equipment and materials from across the region. All of these are available in the online catalogue GEFF Technology Selector and meet the high standards of efficiency defined by the EBRD, thus guaranteeing quality.

For a rough estimate of the potential savings which may be generated by installing energy efficient technologies in your home, the EBRD-GEFF Programme has developed an online Energy Savings Calculator. In addition to savings, the Calculator offers information on how certain activities affect greenhouse gas emissions.

GEFF is implemented throughout the Western Balkans through the WB Regional Energy Efficiency Programme (REEP Plus), funded by the European Union, and implemented in cooperation with the Energy Community Secretariat. The Technical Cooperation Programme available through this credit line is supported by the Federal Ministry of Finance of the Republic of Austria and the Western Balkans Investment Framework.