Energy efficiency is making progress in Egypt. In an award ceremony eight investment projects by local companies have been recognised in Cairo today for their contribution to significant reductions of greenhouse gas emissions and the transition to a green economy.

The projects include efficiency and renewable energy investments by companies such as an industrial rooftop solar power producer and a manufacturer of reusable packaging containers made from recycled plastic.

The investments are being financed under the Green Economy Financing Facility (GEFF), a framework jointly funded by the EBRD, Agence Française de Développement (AFD) and the European Investment Bank (EIB). In addition, the European Union Neighbourhood Investment Facility provides a grant of €23.3 million to make investments more affordable as well as providing comprehensive technical assistance.

“We are really pleased to celebrate companies who have invested in green technologies and to award the best energy performers. These projects help to diversify Egypt’s energy mix, which is one of our priorities in the country”, said Khalid Hamza, EBRD Deputy Head of Egypt.

The EBRD has invested almost €5 billion in more than 90 projects in Egypt since it started operations in the country in 2012. The Bank invests in all sectors of the economy to support the private sector and sustainable development.

GEFF in Egypt, a €140 million credit line, is a programme fully dedicated to energy efficiency and renewable energy investment in Egypt that was launched in December 2016. 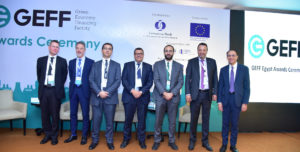 BBB
Necessary Always Enabled
Necessary cookies are absolutely essential for the website to function properly. This category only includes cookies that ensures basic functionalities and security features of the website. These cookies do not store any personal information.
Non-necessary
Any cookies that may not be particularly necessary for the website to function and is used specifically to collect user personal data via analytics, ads, other embedded contents are termed as non-necessary cookies. It is mandatory to procure user consent prior to running these cookies on your website.
SAVE & ACCEPT