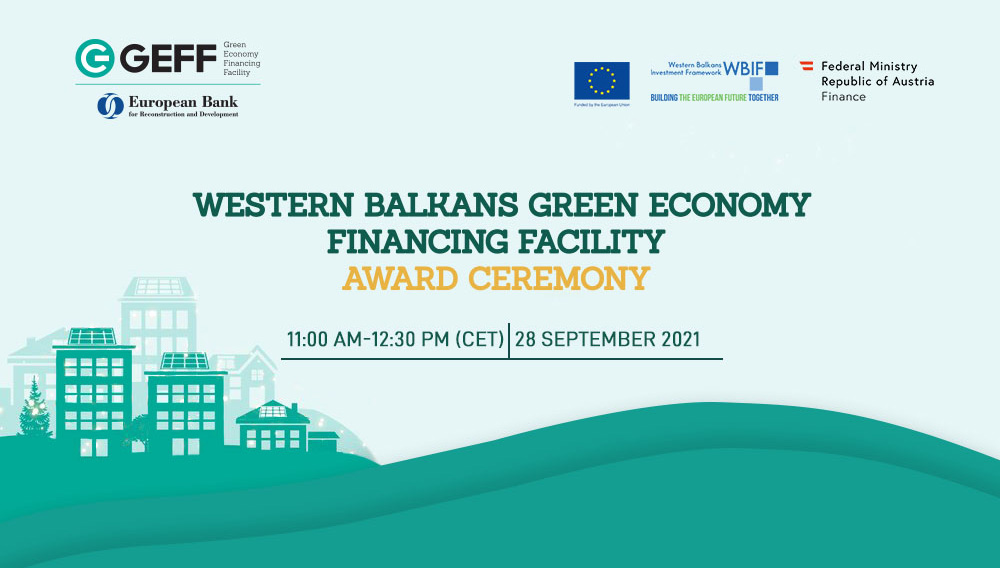 Presentation of the GEFF Programme results and announcement of further investments in the green economy’s housing sector will be held on 28 September 2021, online

On Tuesday, 28 September 2021, starting at 11:00 am, the European Bank for Reconstruction and Development (EBRD), will hold the GEFF Award Ceremony for the Western Balkans. The event will be held online and will be available to viewers via a live broadcast on the Balkan Green Energy News portal.

The aim of the event is to present the results of the Western Balkans GEFF (Green Economy Financing Facility) Programme i.e., the EBRD credit line that provides funds for investments in the green economy’s housing sector. Over the past four years, the Programme has helped more than 9,000 households regionally to improve their energy efficiency. During the event, acknowledgement and awards will be presented to all those who have contributed to the success of the Programme. And, the plan is to plant approximately 1,000 trees throughout the region.

A panel discussion will be held during the event to discuss challenges and plans to increase investment in energy efficiency and further green up the region’s economy, in line with the EU’s Green Agenda and the WB Economic and Investment Plan.

Speakers and panellists of the GEFF Award Ceremony for the Western Balkans to address the audience include:

The EBRD – GEFF Credit line provides funds for investments in the green economy’s housing sector in the WB, as well as to companies that provide energy efficiency and renewable energy sources to households through their products and services. Over the past four years, over EUR 44 million has been invested in energy efficient technologies through the GEFF programme in the WB. Over 9,000 households have improved their energy efficiency, thereby reducing energy consumption and costs, improving the quality of life and reducing environmental pollution. CO2 emissions have been reduced by over 12,000 tonnes per year, which is equivalent to removing 7,700 cars from the streets.

The GEFF programme for the Western Balkans continues, and a total of EUR 135 million will be aimed at increasing energy efficiency in the WB region, thus mitigating climate change.

GEFF is implemented locally via the Regional Energy Efficiency Programme (REEP Plus), and is supported by a grant issued by the European Union (EU), the Western Balkans Investment Framework (WBIF) and the Federal Ministry of Finance of the Republic of Austria (BMF).