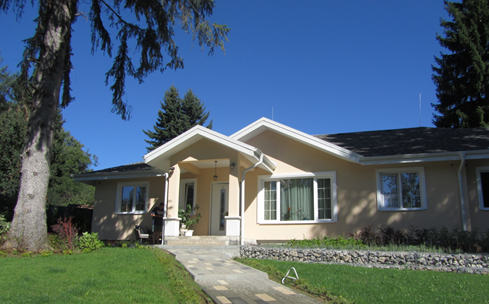 This family house located in the village of Bistritsa is laid out on a single storey with a total heated area of 212 m2. Following the recommendations of the REECL team, Mr Stoyanov decided to build a nearly zero-energy building nZEB home by upgrading the building services to underfloor heating provided by highly efficient heat pump and architecturally improving the details of the building envelope. This led to improving the designed energy performance rating of the building from 177 kWh/m2 to 83 kWh/m2  making the house meet the EU nZEB standards for Bulgaria.

Mr. Stoyanov and his family lived in an apartment building in the busy central part of the city of Sofia. They decided to move to a quieter, more spacious and cleaner place in the outskirts of Sofia. They applied for a mortgage loan with Pireaus Bank who directed them to the REECL consultants to discuss REECL financing options. After the consultation, Mr. Stoyanov decided to change their project designs to make their home nZEB compliant and benefit from REECL financing and higher investment incentive.

Mr. Stoyanov was motivated to build a nZEB house because of the  wide range of benefits it offered such as: low impact from future energy price increases; better comfort due to more uniform interior temperatures; reduced total cost of ownership due to improved energy efficiency; reduced total net monthly cost of living; improved reliability – modern heat pump technologies last over 20 years. The extra cost of energy efficient building services is minimized for new construction compared to an afterthought retrofit and the property will have a higher resale value as potential owners will demand more nZEBs than available supply.

After spending a winter season in his new home, Mr. Stoyanov was very pleased with the low energy bills. He estimated that they might be saving at least €800 a year on their energy bills.

The new house led to a reduction of the CO2 emissions by 4,952 kg per year, making a valuable input towards Bulgaria efforts to achieve emission targets.

Mr. Stoyanov stated that he was very glad he was advised to build their new house to nZEB standards as the future EU driven legislative restrictions, and carbon emission taxes/penalties may force expensive retrofits upon inefficient buildings in Bulgaria.

REECL Facility in Bulgaria is part of the GEFF programme and was developed by the European Bank for Reconstruction and Development (EBRD) and is supported by the Kozloduy International Decommissioning Support Fund (KIDSF).