Upgrade of the trolleybus rolling stock 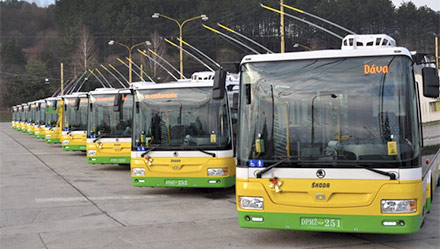 Zilina is the fifth largest city in the Slovak Republic and a university centre. It is also one of the five cities, which has a trolleybus network to service its 85,000 citizens.

DPMZ, the transport company of Zilina, belongs to the municipality and provides transportation services in the city and the surroundings. The company employes 259 locals and has the fleet of 42 buses and 41 trolleybuses.

The SlovSEFF team assessed the project, its potential of energy savings, profitability and environmental aspects. After the project completion in June 2013, a series of measurements were done to compare the previous electricity consumption of the company and the new one.

The investment of slightly over €2 million resulted in the reduced energy, operation & maintenance costs. The annual energy cost savings of €19,123 were generated from reduction of electricity consumption by 32 per cent. The total cost savings amounted to €39,123 per year. Also, the vehicles have now become more convenient for users as they provide the low floor entrance.

DPMZ demonstrated best practices of transport company operation as it expands the variety of services, offers online bus schedules and comfortable vehicles for the customers. Energy efficiency is the next step in its development, making the company more profitable and environmentally friendly. The DPMZ project resulted in 62 tonnes of CO2 emissions decrease per year.