Minimisation of wastes and emissions 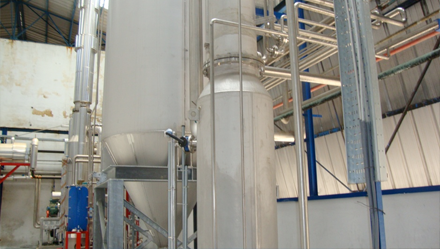 Win-win-win modernization in the chemical sector

SOTRAMEG, established in 1975, is the Moroccan leader on ethanol production for the chemical, pharmaceutical, cosmetic and vinegar industries. The company largely supplies to the domestic market.

The company contacted MorSEFF for a financing and advisory package to reduce its energy bill and stay competitive. CO2 emissions is also an intrinsic feature of this type of production. Technical ethanol is produced through fermentation of beet molasses and sugar cane. As a result, ethanol and carbon dioxide wastes (CO2) are released in the process. The MorSEFF investment project included two components:

The €920,000 investment allowed the company to reduce its energy consumption by 590 MWh per year, leading to high cost savings. The investment will repay out of energy savings in less than four years, turning the future cash-flows into company income for the years to follow. In addition, the company could reduce its CO2 emissions by a substantial 3,900 tonnes per year, making a valuable input to mitigation of the negative effect of human activity on the climate.

The EBRD, through MorSEFF, supports the sustainable financing and implementation of energy efficiency and renewable energy projects by the private sector. Together, the private, residential and public sectors can make a change in the energy consumption patterns and contribute to environmental protection.