Heating 60 households all year round; employment for 12 local people 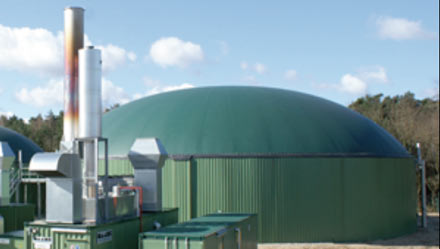 Moldova’s first biogas plant producing electricity and heat from biogas is located in Colonita village, 7 kilometres from the capital. It was implemented by a small private company GT Moraru headed by a local electrician, who recognised the future energy crisis and energetic value of agricultural wastes back in the 90’s.

GT Moraru commissioned the 87 kW biogas plant in 2004. Unfortunately, it had to stop operations in 2008 as the nearby cattle farm supplying the manure for biogas production closed down. During the non-operating period, the biogas plant was partially damaged.

After the supply of organic waste was once again secured, GT Moraru applied to MoSEFF for financing of the biogas plant rehabilitation, purchase of equipment and vehicles to transport the organic waste, improvements of the biomass and slurry handling, and reconnection to the grid.

The €37,300 investment allowed the company to restart operations of the successful biogas plant and generate enough energy to heat 60 households all year round. Today, the company sells around 1400 kWt per day to the grid and is ready to produce even more for the local needs.

As Vasiliy Moraru, director of the company says, “A biogas plant in agriculture is a goldmine, as it produces heat, electricity and fertilisers from waste.”

In addition, the environment gets a double positive impact due to lower waste production and lower CO2 emissions. Last, but not least, twelve local people are employed by the enterprise.