Improving the Energy Efficiency and Comfort of Patients in a Medical Centre in Istfana, Kyrgyzstan 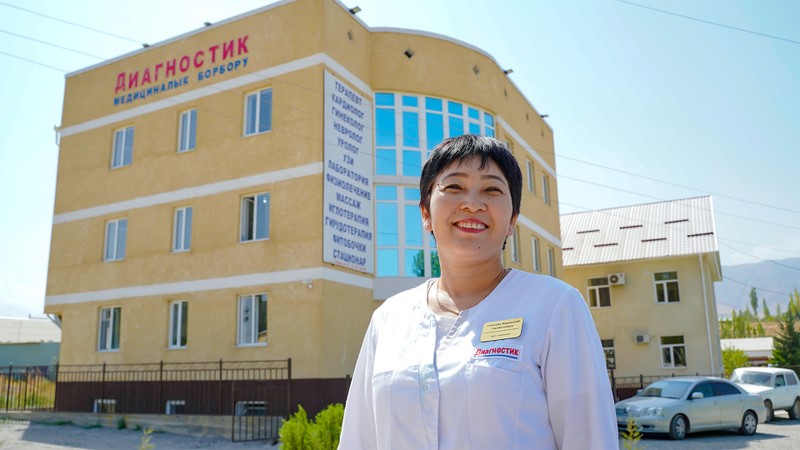 The medical center ‘Diagnostic’ was founded in 2009. The main goal of he center, located in the Batken region, is to provide the population with an accurate diagnosis and prescribe treatment to the patient in one place, a service that patients would normally have to travel to Bishkek for.

The medical center ‘Diagnostic’ was founded in 2009. The main goal of he center, located in the Batken region, is to provide the population with an accurate diagnosis and prescribe treatment to the patient in one place, a service that patients would normally have to travel to Bishkek for.

At that time, Jarkynai Ganyeva and her husband, who were both doctors, rented two rooms and opened a private a private medical practice in Southern Kyrgyzstan. In 2012, they expanded and built a small building with a floor space of 300 m2. However, the construction was carried out without much attention to energy efficiency.

“The building was very cold. Furthermore, electricity (the main source if heating in Kyrgyzstan’s urban centres) has become more expensive and we have been given a consumption limit (this is the norm for commercial entities to balance out the electricity shortages) and we had to using coal to heat the center. We burned about 20 tons per season. This was a substantial cost for us, not even to mention harmful emissions”, says Jarkynai Ganyeva.

In 2017, the center once more expanded to reach a floor space of 800 m2. For this new expansion the owners consulted with the engineers of the Kyrgyz Sustainable Energy Financing Facility (KyrSEFF) to avoid repeating the mistakes made in the original construction.  In the new building the walls, ceiling and floor were insulated in the building and a new efficient boiler was installed for heating the rooms. LED lighting was installed to achieve higher quality but efficient illumination. In addition, new toilets have been installed in the wards. Since there is a shortage of water in the region, KyrSEFF experts suggested using water-saving toilets instead of ordinary toilets, as well as installing water-saving taps.

All energy efficiency measure installed are listed in the Technology Selector and can easily be combined into a simple investment process. The total KyrSEFF loan for all measures was US$23,253. Energy consumption was subsequently reduced by 296 MWh/year and carbon emissions by 93 tons per year.

After the successful project verification, the medical center receives a grant of US$3,489 from the European Union (IFCA).