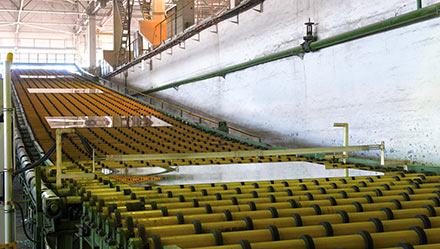 Integlass is one of the largest industrial enterprises, not only in Kyrgyz Republic, but in the entire region, and the only manufacturer of flat glass in Central Asia.

The company applied to KyrSEFF to finance the modernisation of its furnace – a significant energy consumer in the energy-intensive process. Although the company has already implemented a major renovation before, this measure was still deemed worthwhile.

The project included the purchase of refractory oven bricks and other furnace modernisation measures, significantly improving the furnace’s lifetime and its thermal insulation.

The $900,000 loan allowed the company to decrease its energy consumption by 50 per cent and carbon emissions by 1,437 tonnes of CO2 per year. This led to significant cost savings, making the investment financially viable. According to KyrSEFF experts, the investment will be repaid in less than five years from energy savings alone.

After the successful project implementation, the energy savings were confirmed by the KyrSEFF Verification Consultant and Interglass received a $126,000 investment incentive.

This project demonstrates that even advanced companies have huge potential for energy efficiency improvements, which goes hand in hand with the company’s profitability and positive environmental impact.

This project was supported by the European Union (EU) and the Investment Facility for Central Asia (IFCA).