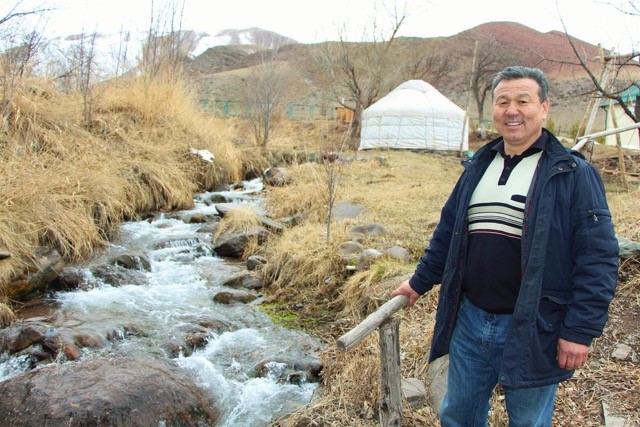 The Ak-Tilek resort is located in the picturesque Belogorka gorge on the shores of the Shabai River in the Sokuluk district. It is a popular destination not only among those admiring the beauty of the nature, but those interested
in improving their health by drinking kumys. The clean air and mountains are also perfect conditions for sportsmen to practice.
Dozens of villages are located downstream from the resort. Their citizens use the river water for daily needs, and that is why the installation of a treatment facility was not only an issue of environmental protection, but also one of people’s access to drinking water.
At the end of 2017, the resort used a GEFF loan to invest USD 19,100 in a modern wastewater treatment facility. Scaled for up to 75 people, the plant provides sewage treatment meeting the established sanitary norms and regulations, which allow the water to be dispersed into the local terrain or to be used for irrigation of gardens and fields.
“I love my country and cherish its beauty. Three years ago, when we started our business on this territory, we considered the installation of a modern wastewater treatment facility. Indeed, polluting the crystal clear river water, used both by us and people living downriver, is not only irresponsible but can also be considered as an “environmental sin,” - says Omor Dzhumanazarov, the resort owner.
The process of wastewater treatment includes several consecutive stages of mechanical and biological treatment. Sewage is rst pumped into a tank for mechanical treatment where insoluble and large particles are grinded.
After that, the wastewater undergoes a biological treatment stage, which is based on microorganisms that feed on certain pollutants. Purified water is then diverted to the ground through a drainage system with an area of 120 sq. m. If necessary, it can be pumped into a plastic tank and be used later for watering.