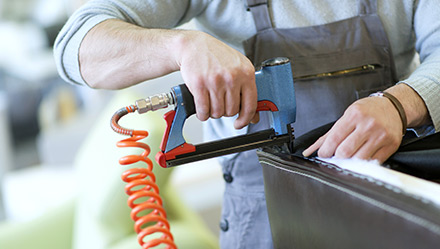 The company decided to modernise its 27,000-square meter cut-and-sew factory in Kenitra having faced the challenges of the energy market liberalisation and increased competition.

Faurecia addressed MorSEFF for financing of a project consisting of replacement of old sewing machines, cutting machine and lighting.

The final project included installation of 87 high-efficiency direct drive sewing machines, four cutting machines and 400 LED lamps. The aim was to increase the production capacity and enhance energy efficiency to boost the competitiveness. The company also seeks to augment its market position through promoting a positive, environmentally friendly brand image.

The MorSEFF team performed the analysis of the proposed technologies, their potential for energy savings, financial-technical parameters and profitability of the project.

The €1.87 million investment allowed Faurecia to reduce its energy consumption by 809 MWh per year, leading to 50 per cent energy cost savings. The investment will be repaid out of energy savings in less than six years, turning the future cash-flows into company income for the years to follow. This investment also resulted in increased production capacity, lower production costs, improved working conditions and increased revenues.

The EBRD, through MorSEFF, supports the sustainable financing and implementation of energy efficiency and renewable energy projects by the private sector. Together, the private, residential and public sectors can make a change in energy consumption patterns and contribute to environmental protection.